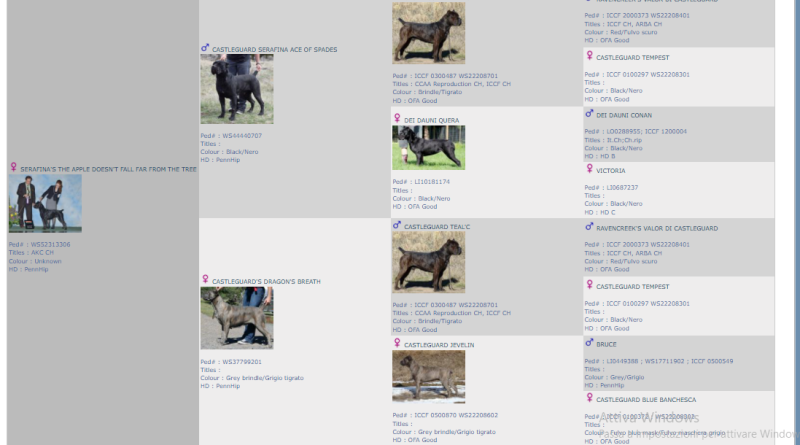 Articles
23rd March 202223rd March 2022 canecorsonancy 0 Comments
Pedigrees are much more than dog names on a piece of paper. To dog breeders, pedigree analysis is more important than DNA because a top breeder can “read” genetic soundness.
Purebred dogs are much more than a pretty cover so it is the “family tree” that determines what is inside the eye-catching exterior.
It’s a fast paced world out there and increasingly, everyone is or wants to be in the express lane. As you may have noticed, that can lead to pileups. If you’re too busy to study a stud dog’s pedigree and learning basic genetics seems like a waste of time, well, your “breeding program” is headed towards a fatal crash.
According to AKC records, the average life span of a new breeder used to be 5 years but I’ll wager it is now less than 3 years. So it only seems fair to take 3 minutes to learn things that can extend your time in dogs with contributions to the breed. Small rewards, like “bait” lead you onwards and help you succeed as a breeder.
Names on a pedigree tell you nothing unless…
… you’ve seen at least half of the first 14 dogs. If a dog is “repeated”, i.e., appears more than once, pay particular attention and research that dog. If you haven’t observed the dog in person, try to get a video. Photos are better than nothing but be aware that digital retouching is common today and the very fault you are trying to eliminate from your breeding program can be erased from a photo.
Parents and grandparents usually represent the most dominant genes in the pedigree but not necessarily. We’ll get to the “doubled up on” factor shortly but for right now, you need to know the phenotype and genotype of the first 6 dogs; sire, dam, and all four grandparents.
The importance of having a knowledgeable AND objective mentor in the breed can’t be stressed enough. Depending on which bloodline the pedigree represents, your mentor may be a bit biased. It’s human nature. The important thing when selecting a mentor to help you sort out a particular pedigree is: Has your potential mentor actually seen the first 6 dogs on the pedigree and hopefully, some of the siblings?
Look for genetic evidence of thoughtful line-breeding on a particular dog within the third or fourth generation of the pedigree you are literally buying into. If that dog produced consistently well, count him as being in the first or second generation because his genes are more concentrated and should therefore be more powerful.
A dominant, linebred grandparent repeated on the pedigree…
… can contribute as much as any one of the first 6 dogs. Hang on though, before you run into that pedigree pileup, you need to know there’s a little glitch in the above statement. More so today than ever before, most so-called line breedings occur as a matter of economy or convenience, not due to study of the genetics involved. A mediocre dog repeated in the pedigree can be bad news. It’s up to you to ferret out the concentrated dog’s quality before getting excited about a “line-bred” pedigree.
Even if a dog and bitch are outstanding representatives, it matters not unless they are genetically compatible.
A compatible pedigree means that neither sire nor dam …
… share the same fault either visibly (dominant) or hidden in their genes (recessive). Ideally, both would be dominant for the most important features of breed type and/or soundness. Do not mistake compatibility as being “from the same bloodline” because frankly, very few real bloodlines exist today.
Anyone can get lucky once or even twice. Before you buy into a pedigree, you need to slow down and take a good look at the road ahead. You must have a readable map (pedigree) because there’s no shortcut to your destination.
Don’t let the scenery distract you. The pedigree may look perfectly beautiful but see as many of those dogs as possible. You can then apply what you’ve learned into structuring a pedigree that will last and hopefully, become a superhighway for someone else!
As years went by, it became increasingly obvious that many breeders read names on a pedigree but have no idea if those dogs were prepotent and if so, for what? Today breeders put more emphasis on ring fame and not nearly enough on genetic prepotency and actual quality.
Breeding to a top dog means saleable puppies but it may not increase your reputation as a gifted breeder. Ring success can be bought with a good handler and a fat wallet. What you do afterwards involves you! I trust you are willing to take the time (gasp) to learn the basics and apply yourself to doing it right.
Source:  Terrie Serafina