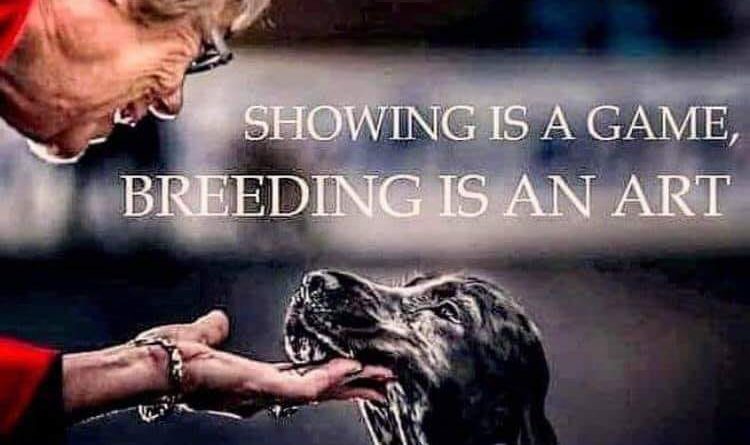 Did you ever notice how easily judges, exhibitors and breeders get used to changes within a breed? In many cases it even goes so far that these changes are gradually lifted to the level of required characteristics. It is mostly dogs of well-known breeders/exhibitors that start a certain change (read : set a trend) within a breed. There is for instance the somewhat bigger Miniature Schnauzer with the terrier “look”; the somewhat leveller elegant looking Shih Tzu with its long neck; the Weimaraner who becomes bigger and bigger and more impressive ; the “American” English Springer Spaniel, to name a few breeds.

As soon as a dog with a slightly ‘deviating’ type starts winning, the ball starts rolling. The dog goes to the ring of honour, the one judge bends over to his neighbour and says; “have you seen that beautiful dog”? Breeders and exhibitors notice that judges like that particular dog and start trying to breed or to buy that type of dog. At such a moment the original Breed Standard does not seem to be of importance to some exhibitors, winning in the show ring is all that matters to them.

When after some time you are sitting at the show ring looking at that breed again, it could happen that you see in a class e.g. 5 dogs of which 4 are ‘deviating’ from the standard next to a correct “standard” type of dog. At most shows the (correct) (complying) to the “standard” dog will be considered to be the ‘odd one’ and the true ‘deviating ones’ will be placed behind the boards 1 through 4. For those breeders that adhere to the Standard this is a very frustrating experience. The temptation is of course very big. Many of the deviating dogs are often very flashy looking ones, and often show a gait, exterior and motion that looks more spectacular than the movement of the ‘standard’ dog. One has to be very strong and come from a good breed conscience background to resist the temptations and keep on preaching the true belief and keep breeding in compliance with the standard.

Often the appearance of difference in type in a breed leads to polarisation between judges and breeders alike. One of the hallmarks of this polarisation is that certain characteristics of the dogs are even more exaggerated to make it stand out and be recognisable.

So one can observe that and conclude that the nonadherence to the standard of many breeders / exhibitors and judges poses a direct danger to the existence of our breed population.

Except for getting used to trends within a breed, the getting used and the acceptance of inherited faults is a problem of the same kind or even worse.

When judges repeatedly reward dogs with these faults with an ‘excellent’ and also give them their championship tickets, breeders will not be challenged to improve the breed : they are already winning! In such cases only the die-hards and true idealists remain faithful to the breed and try to improve on it, but how many of those people do we have within one breed?

Accepting without any objection of changes that please the eye but are against the standard is an open invitation to the ‘silent breed killer’ to do his job and carry out his devastating work within the breed.

Seen from the perspective that breeding is nothing more then passing on genetic material to the next generation, allowing this to happen means that one wilfully accepts and helps spreading of genetically deviating material in an irresponsible way that will pollute the genepool (hereditary material) .

Would it not be good if breeders and judges would, at least once a month take the standard at hand of the breeds they are entrusted, and what would it be valuable to organise regular meetings with breeders and judges to discuss certain trends and ‘faults’ that creep up in a breed. Never forget that the only guideline during judging and breeding should be the FCI – approved breed standard.

So, behave and act as true disciples and spread the gospel according to the original breed standard.

11 thoughts on “A silent breed killer”